Riding An E-bike For The First Time

Riding An
E-bike
for the
First Time

One of the best things about e-bikes is the enthusiasm and collective knowledge of the community. With only a few clicks or a quick search, you can access deep knowledge on motor power, accessories, modifications, and even the advantages and disadvantages of different cable rotation arrangements.

Before we can get into all that, however, we need to cover what a beginner needs to know! Those of you who just got their first e-bike, or are considering getting one but not sure what to prepare for before their first ride - read on!

Riders with experience on conventional bicycles won’t have a hard time with the controls of most e-bikes. Still, certain points should be checked before your first e-bike ride, such as if your battery is charged, if your e-bike is fully assembled, if your tires are inflated, and - it can’t be emphasized enough - if the condition of your helmet is good. The rest, such as if your outfit is suitable for a ride, is not very different from a ride on a conventional bicycle.

The second thing is to check if your e-bike is adjusted to fit you. Sit on your e-bike, grab the bars, and see how the bike feels in terms of reach to the bars, brake lever angle, and seat height, if adjustable. If you primary concern is pedaling, adjust the seat so your legs are almost locked out at the bottom of the pedal stroke to make pedaling the most efficient. If you're primarily throttle-only, adjust the seat so you can put one or two feet flat on the ground when stopped without having to shift off the seat. These are only starting points, and as you get more experience, you'll likely tweak the settings to suit your riding style. 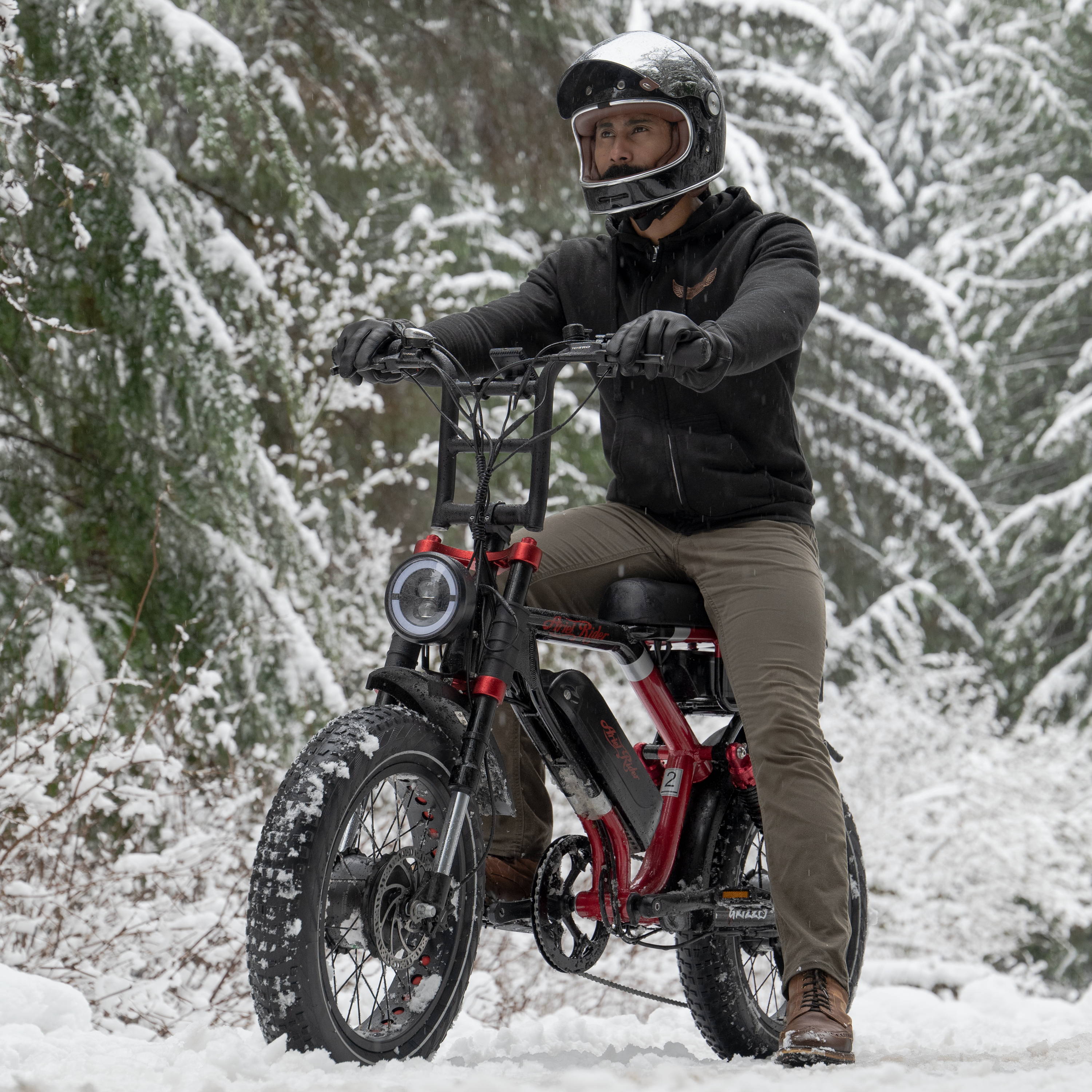 Know How To Stop

What’s next? The brakes. The standard on bicycles and e-bikes in the US is to attach the right brake lever to the rear brake, and the left lever to the front brake. Most people familiar with bicycles may have grown up with the myth that they should only use the rear brake to stop, as the front brake will just throw you over the bars like a catapult. While it's true the front brake can eject a rider if used too hard, ignoring it completely will compromise your safety and needlessly extend your stopping distance. The front brake will, in good conditions, provide around 70% of your total stopping power, significantly reducing your stopping distance versus using just the rear brake alone. The trick is to squeeze the brake lever and NEVER jab it. Grabbing a handful of front brake is a recipe for an endo, or on heavier e-bikes and/or in poor traction conditions, washing out the front wheel. When traction is sketchy, like on gravel, grass, or other loose surfaces, you'll want to use more rear brake and a bit less front brake. If the rear locks up, it's much easier to save the slide than a locked-up front tire. You should also use less brake if you're leaned over, as a portion of your available traction is already being used to turn the bike. Using the same amount of brake as you would in a straight line will likely cause a crash, so use less brake or, in an emergency, staighten the bike out so you can stop quicker. No mattery what conditions you end up riding in, it's best to practice using both brakes in a safe area by doing several practice stops and gradually squeezing the brake lever more and more on each pass to learn how hard you can squeeze the front brake and build that limit into your memory. Good brakes are the best safety device on your bike, and learning how to use them to their full potential is one of the first things a new rider should practice. 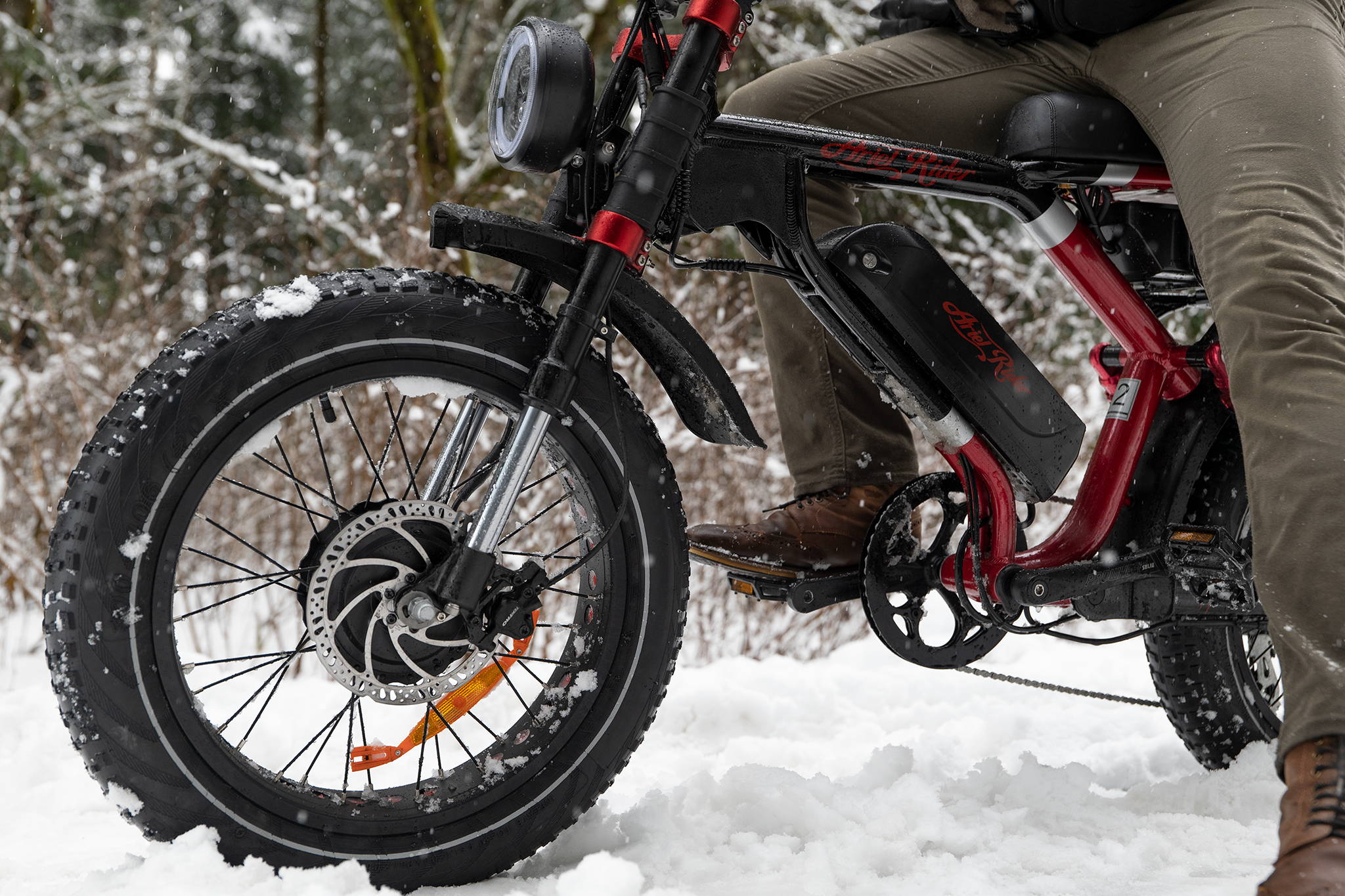 If your battery is detachable, make sure it's mounted correctly. A properly locked battery shouldn’t slide out, so become familiar with how it mounts and funtions. Also make sure you get an understanding of the information on your control screen, like pedal assist levels, remaining battery power, and headlight status among other things. You probably can't process all the screen info at just a glance, but becoming familiar with the info displayed on screen will help you quickly see what you need and keep your eyes on the road. 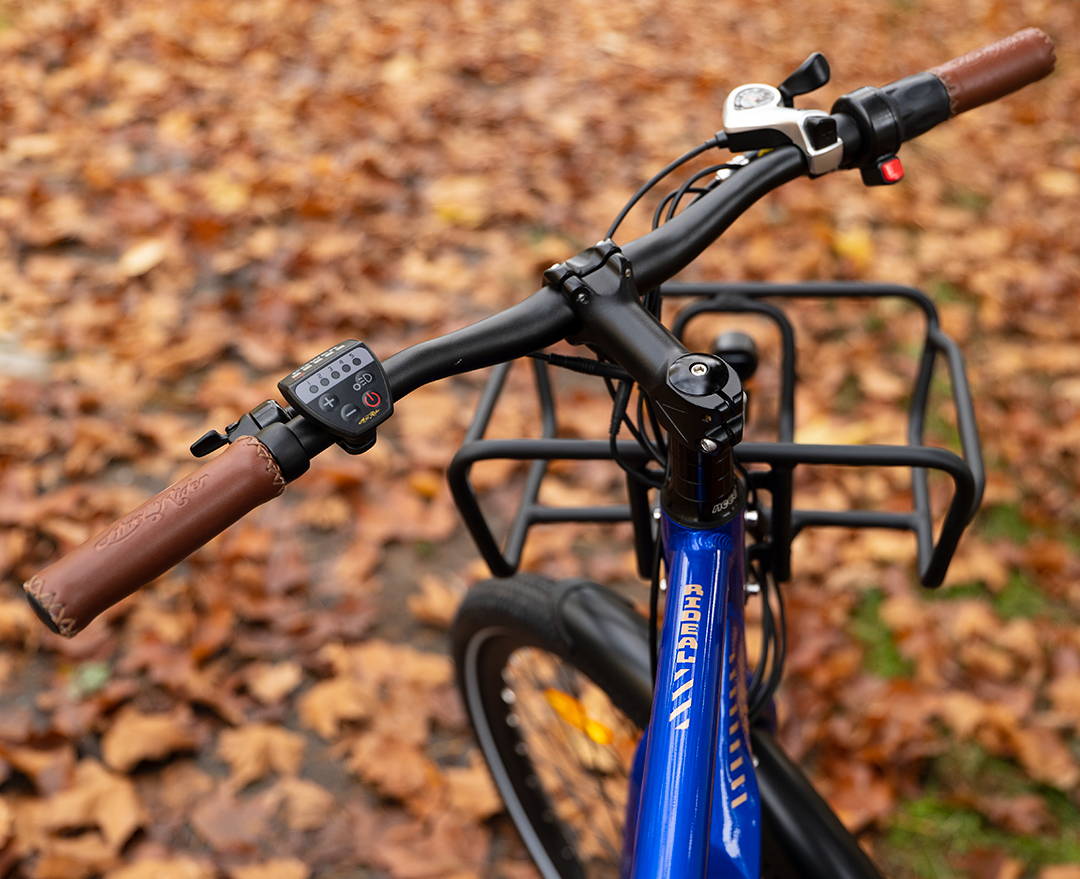 Time to put on your helmet and swing a leg over your e-bike! If your e-bike is equipped with a throttle, test it with a slow, gradual twist or push. You'll quickly get an idea of how little throttle you need to get moving, and how much power is on tap from a standstill. You can also turn pedal assist to its lowest level, or completely off until you become more familiar with your bike's handling. It can always be turned back up at any time, so once you're comfortable, try each level until you find what works best for your pedaling speed.

Safety is important! Ensure that the road is clear and practice taking off on your e-bike a few different ways. Using throttle, pedal assist, or a combination of both are techniques you'll likely use on each ride. Throttle only from a start until you're traveling fast enough for pedaling is a common hybrid method, so you may want to practice it a few times before attempting it on busy bike trails or in bike lanes next to lumbering SUVs.

Now that you've got an idea of where to start with an e-bike, remember to always wear your helmet! Firsts are everything in life, and your first ride on your e-bike is sure to be one you won't forget. Enjoy the ride!